Adaptations on A Christmas Carol

Posted on December 10, 2012 by teatrovivoatx 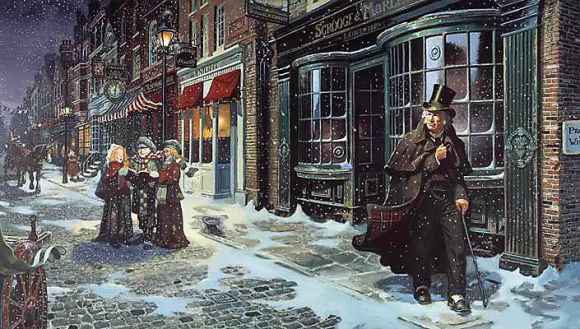 In the spirit of Cuento Navideño, here’s a look at a few other adaptations from Charles Dickens’ A Christmas Carol. This piece of Christmas tradition has been adapted on stage, screen and even through Scrooge, but first let’s take a trip to the past and learn about Mr. Dickens’ original work. Charles Dickens first wrote A Christmas Carol in 1843. Dickens wrote the timed classic to lift spirits during the depression of the 1840s. The story takes audiences on a self-reflecting journey to the past, present and future where main character, Ebenezer Scrooge, turns a bitter, greedy life into a meaningful one. The story is a powerful classic because it reminds others what is really important in life.

On stage, this story comes to life. A Christmas Carol has been performed both as a musical and as a straight play for decades. Over the years, this beloved Christmas tale has been showcased on many stages and broadcasted through hundreds of screens, but none of them have been adapted with a cultural flare, that’s where Teatro Vivo’s Cuento Navideño comes into play. With rich family values, culture and community, Cuento Navideño showcases a Bah Humbug like no other. So if you’re looking for an adaptation on A Christmas Carol that’s unique, stop by the Rollins Studio Theatre at the Long Center next weekend for a special treat!

← Cuento Navideño: A Tradition in Christmas Theater
Christmas in Austin →