THANK YOU for participating in the Austin Latinx New Play Festival, May 14-16, 2020.

If you attended any of the events below, please take our audience survey (live link)! Your feedback will be used to plan future virtual events. Thank you!

Teatro Vivo in collaboration with ScriptWorks, unites playwrights and audience members in conversation surrounding new works of Latino theatre. After each performance, the playwright participates in a talkback session with the audience. The ALNPF features four new plays by playwrights from throughout the U.S.

We are so excited to be sharing these shows with you online along with talkbacks with our playwrights & dramaturgs each night! Each day we’ll feature a new play reading on our website and a talkback with each playwright at 8 p.m or 3pm. Each recorded performance will only be available from 12pm CST until the post-show discussion time. Stay tuned for daily announcements for each play! Click on the links below to access performances and Zoom discussion links.

The Cucuy Will Find You
by Jaymes Sanchez

Jaymes Sanchez is a Texan playwright, actor, director, and educator. Jaymes’s work portrays the complex, poetic, and underrepresented lives of people of color and the urban working class. Jaymes’s play THE CUCUY WILL FIND YOU was featured in the Lark’s Playwrights’ week 2019. SODA FROM WATER CUPS was a finalist for the Latinx Theatre Commons’ 2018 Carnaval of New Latinx work. Jaymes’s play WHO OWNS WHAT was featured in Artists’ Theater of Boston’s production of THIS PLACE/DISPLACED, a series of short plays about displacement, eviction, and gentrification. Jaymes is a Company One Playlab Fellow for 2019 and was a member of the Company One PlayLab Unit for 2018. Jaymes earned a Master of Arts in Teaching degree from Brown University and taught English and Theatre at Milton High School. Jaymes is pursuing a Master of Fine Arts in Playwriting at the Michener Center for Writers at the University of Texas at Austin.

This Post-Show Discussion has been moved to May 16 at noon CST, to give audiences more time to view the performance. Thanks for your patience!

Massi’s a playwright and essayist from Albuquerque, NM currently residing in Brooklyn, New York. She specializes in theatre about borders and takes her influences from the many incredible Latinx playwrights and poets working to shake up the current theatre scene. My Mother the Sun was recently performed as part of the Echo Theatre’s Young Playwrights in Residence program. Check out their other plays at New Play Exchange, particularly Penelope Clefts Herself in Two Along an Invisible Line (NTI Fall 2017), Las Marthas (Drake University 2018), and Calypso in Harlem (Great Plains Theatre Conference.) Special thanks to Boni Alvarez, who gives sensational advice, and Lourdes Gutierrez Najera, without whom this play could not have been made.
Dramaturg: Siri Gurudev
Director: Khristián Méndez Aguirre
Cast: Mary Alice Carnes, Julissa Gonzales, Sol Bautista, Sierra Boudoin, Kennedy Thompson, Benjamin Cervantes, Juan Leyva, Brooks Laney, Javier A Rodriguez, Genevieve Schroeder-Arce 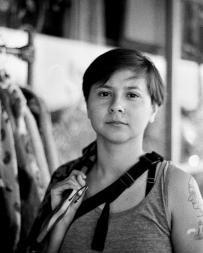 Ryan Oliveira is a playwright, dramaturg, songwriter, and performer. Recent productions include: Desire in a Tinier House (Pride Films and Plays, 2019) and Soccer Player in the Closet (Nothing Without a Company, 2019). He has had his work developed with Prop Thtr, Activate: Midwest, The New Colony, and Broken Nose Theatre. He has also been a finalist for the 2019 Disquiet Luso-American Fellowship and a semifinalist for the O’Neill Theatre Conference (Chaos, 2017; The Rigel Event, 2014). Both Desire in a Tinier House and stray have been included in Steppenwolf Theatre’s The Mix, highlighting plays with diverse casts seeking further development and production throughout the United States. MFA: The University of Iowa, 2015; BA: Cornell University, 2008. You can check out more of his work at: www.ryanoliveira.com

This project is supported in part by the Cultural Arts Division of the City of Austin Economic Development Department, the National Endowment for the Arts, and the Texas Commission on the Arts.