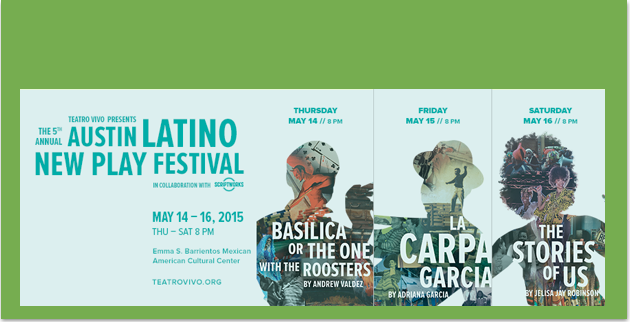 at the Emma S. Barrientos Mexican American Cultural Center May 14-16, 2015

Teatro Vivo presents the fifth annual Austin Latino New Play Festival (ALNPF) in collaboration with ScriptWorks May 14-16, 8 p.m. at the Emma S. Barrientos Mexican American Cultural Center. The festival includes three evenings of staged readings of new Latino plays with nightly general admission that is “pay what you wish.” A $40 festival pass is available for those attending all three evenings, and reserved seats may be purchased for $15 each evening. Visit teatrovivo.org for information.

ALNPF is a theater event that brings playwrights and audience members together in conversation surrounding three new workshop productions that bring insight into the Latino experience. After each reading, the playwright and director participate in talkback sessions with the audience. The productions have Latino roots and explore cross-cultural themes and modern dilemmas that surprise, challenge, engage, and push the dramatic envelope for audience members accustomed to one-way conversations at the theater.

Thursday, May 14 (8 p.m.): Basilica or The One With The Roosters by Andrew Valdez

Synopsis: Basilica or The One With The Roosters follows a Mexican family who seeks to enrich their lives by moving to the United States. Lupe makes a “deal with the devil,” gambling away his home and worldly possessions and endangering the lives of his loved ones for an opportunity to move to Helms, Illinois. Ultimately it’s up to Juanita, AnaSophia, Diego, and Julieta to atone for the sins of their father.

Playwright: Andrew is a student at the University of Texas at Austin studying biology and pursuing a position in Pediatrics and Theater Arts, with a focus in Theater for Young Audiences. His hope for the future is to nurture children with the medicine of the stage. Andrew is originally from Donna, Texas. His latest written and produced works include: UTPA Theatre Guild Presents: Melody, And The House It Was Sung In, Alpha Psi Omega Presents: Ticket Out of Night Vale, and Alpha Psi Omega Presents: No Llores, Señor Superior and The Case of The Missing Sun Locket (2014 UT Bridge Festival Selection).

Synopsis: Ya Llego Ya esta aquí! La Carpa Hermanos Garcia, un gran función de acrobáticos, variedad, magia, revisitas cómicas y mucho mas! In La Carpa Garcia, Elderly Mr. Garcia recounts his days as “Don Fito,” a comic in his family’s traveling tent show, to his home health care provider, Hope. Together, they relive the adventures of his brothers and sisters as they work to amaze audiences by performing music, comedy, acrobatics, dance, and death defying acts. From his memories of laughs, love, and loss we find there is a bit of carpero in all of us.

Synopsis: The Stories of Us is a collection of stories that dig deep into the intercultural conflict between African Americans and Latinos, African diaspora identity, and Afrolatinidad. This scrapbook of experiences, histories, and feelings takes its audience through African roots in Mexico, the time you told your brother you were dating a “black girl,” and that moment you were proud of your heritage, combining to reveal people of color trying to navigate each other’s worlds and build one together.

Playwright: Jelisa “Jay” Robinson is a recent graduate of the University of Texas at Austin whose playwrighting passions center around Afro-Latino identity and black and Latino relations. She shares her experiences being an African American deeply involved with and impacted by Afro-Latino cultures on her blog Black Girl, Latin World. Jelisa has worked with theatre, arts, and social justice groups in Rio de Janeiro, Brazil and Austin, TX. Jelisa’s number one passion is creating spaces for people of color to use the arts to empower themselves.

This project is funded and supported in part by the City of Austin through the Economic Growth & Redevelopment Services Office/Cultural Arts Division believing an investment in the arts is an investment in Austin’s future. Visit Austin at NowPlayingAustin.com.